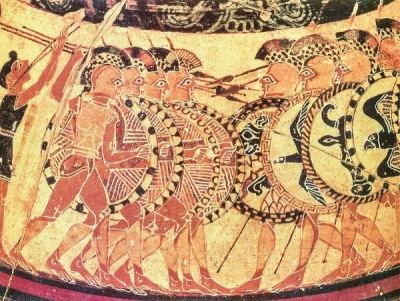 Animating the illustration of a vase, the creators of this wonderful video depict the weapons and the way the soldiers (hoplites) fought in ancient Greece. It is a short animated film created by the group Panoply Animation Vase Project on behalf of the Ure Museum of Greek Archaeology of the University of Reading.

The film was based on basin from Evia, which is hosted in the above museum. The decoration of the vase, apart from the scenes of battle, includes scenes from the preparation of athletes while in the interior is depicted a cockfight rooster.

Οι Έλληνες στον πόλεμο Hoplites! Greeks at War was an animation created for Panoply's 'Every Soldier has a Story' exhibition at the Ure Museum of Greek Archaeology, University of Reading. Visit http://www.panoply.org.uk/everysoldie... to find out more. Licensed under Creative
More in this category: « EUREKA Exhibition Opening Technology in Hesiod »