Model of the Antikythera Mechanism (2017) 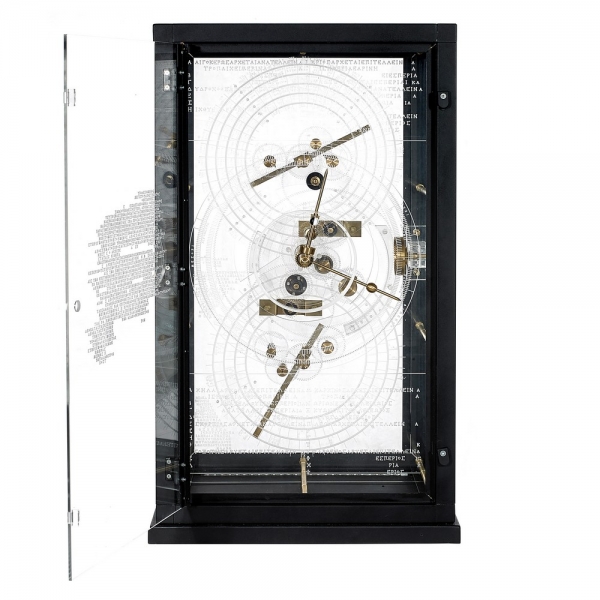 The Antikythera Mechanism was an analog computer of astonishing technical capacity. It was constructed 2,000 years ago and could accurately calculate the position of the sun, the moon and possibly the planets in the sky. It calculated the phases of the moon, predicted eclipses of the sun and the moon and determined the dates on which the ancient Olympic and the other “Crown” games (called “Stefanites”) were held. On its covering plates and on its interior front and rear surfaces it bore astronomical, geographical and technical inscriptions, all written in Greek characters. The height of most of the letters is between 1.5 and 2.5 mm. Thanks to innovative investigative techniques these texts, lost for more than 2,000 years, have now been read (about 3,400 letters).

The mechanism was enclosed in a wooden case with dimensions approximately 30 x 20 x 10 cm, a bit larger than a modern laptop, and contained at least 30 cooperating gears. It had a double circular dial on the front surface and two helical spiral dials on the rear surface.

The Antikythera Mechanism was as important for the development of technology as the Acropolis was for the development of architecture. No other such ancient mechanism has been found. This causes us to consider what technical infrastructure existed at the time when it was constructed and what happened to the knowledge and the skill that enabled its creation and use.

(This is a large scale didactic model, made of transparent materials, fully operational as the prototype).

More in this category: « The moving automatic servant of Philo and Heron The Athenian Τrireme (5th c. B.C.Ε.) »